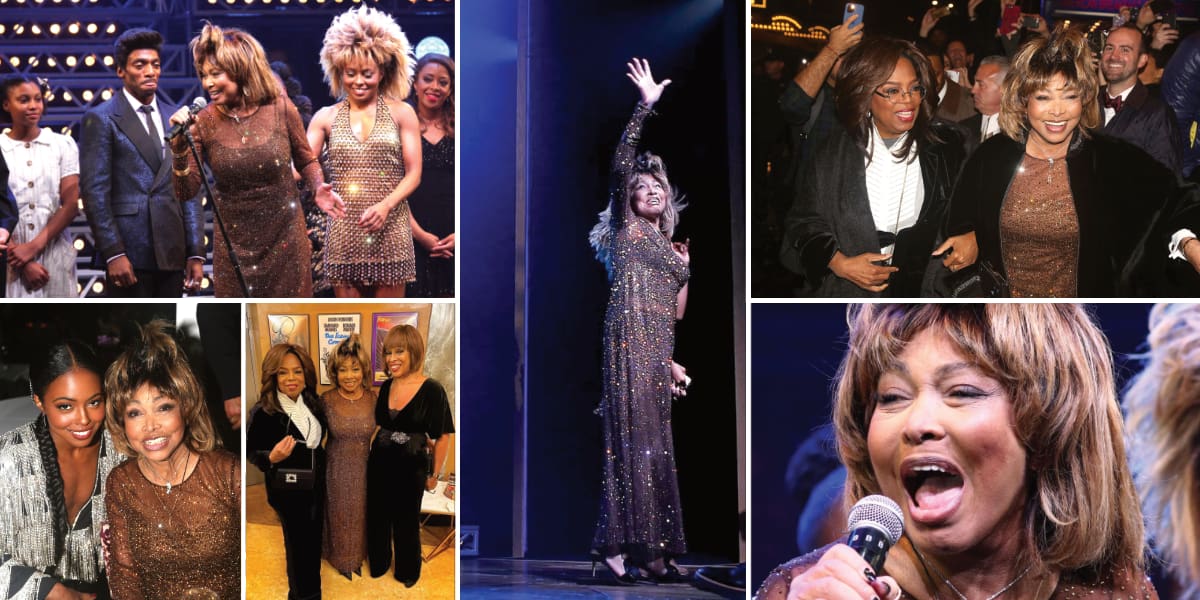 From humble beginnings in Nutbush, Tennessee, to her transformation into the global Queen of Rock'n Roll, Tina Turner didn't just break the rules, she rewrote them. TINA - The Tina Turner Musical, presented in association with Tina Turner herself, reveals the untold story of a woman who dared to defy the bounds of her age, gender and race.

The musical was basically the idea of Tina's husband Erwin Bach  and the project began in 2015, as Tina first met the Dutch producer Joop van den Ende in The Netherlands. One year later on December 16, Tina was in London for the first workshop presentation of the show. In 2017, at the launch party in October, Tina announced that Adrienne Warren will be playing the role of Tina Turner. To promote the musical, she was also guest at the Jonathan Ross tv show on October 28 with her first full length interview in years. The musical received it's world premiere on April 17, 2018 at London’s Aldwych Theatre, attended by Tina Turner together with her husband Erwin and many celebrities. It subsequently has broken all box office records in the West End. After one year of sold out shows, a new cast was introduced on April 15, 2019 with Nkeki Obi-Melekwe playing the role of Tina, while Adrienne Warren will recreate her celebrated performance on Broadway in Autumn 2019.

Germany:
Tina presented Kristina Love as the German Tina Turner at the launch party on October 23, 2018 at the Mojo Club in Hamburg. Kristina also visited Tina in her Swiss home in November and was surprised by Tina singing „Happy Birthday“ to her. The musical premiered on March 05, 2019 at the Stage Operettenhaus in attendance of Tina and her husband Erwin as well as 1.200 invited guests. Tina appeared also on stage at the end of the performance together with the entire cast.

Broadway:
After three very successful weeks of previews, the musical premiered on November 07 in attendance of Tina, her husband Erwin and many celebrities like Oprah Winfrey and Whoopie Goldberg. At the end of the performance, Tina appeared on stage together with the entire cast and thanked everyone for the great show.

Netherlands:
Nyassa Alberta first played the role of Tina in the German version of the musical, moved to the Netherlands to play this role in the Dutch version at the Beatrix Theater in Utrecht. The musical premiered on February 09, 2020, but unfortunately without the attandance of Tina herself.

Tina about the musical

„I asked myself what’s next? I knew I was finished with stage performance - all of me had changed. But this is big and in order to make it as good as possible I must be involved“.

„It's really important to me to have the chance to share my full story. This musical is not about my stardom. It is about the journey I took to get there. Each night I want audiences to take away from the theatre that you can turn poison into medicine“.

„I associate many positive experiences and emotions with Germany and it's also the home of my beloved husband. It is therefore a matter close to my heart to bring my musical here after our celebrated world premiere in London.“

The New York Times: More important, as far as pure entertainment is concerned, this story comes with songs that can thrill an audience when rendered as Turner sang them; at this, the musical “Tina,” directed by Phyllida Lloyd, happily succeeds. In a performance that is part possession, part workout and part wig, Adrienne Warren rocks the rafters and dissolves your doubts about anyone daring to step into the diva’s high heels.

Rolling Stone Magazine: Tina Turner is a star, and so is Adrienne Warren, who unleashes something volcanic from within herself while channeling the Queen of Rock & Roll. Though Warren shines consistently, the vehicle for her bright performance, Tina: The Tina Turner Musical, hits several road bumps while charting the icon’s life from childhood through her Eighties comeback.